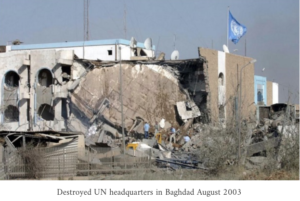 Seventeen years ago, this week, Khaled Mansour  survived a terrorist attack that killed 22 people and injured many, at the UN headquarters in Baghdad. The attack came a few months after the US invasion of Iraq deposed the murderous regime of Saddam Hussein. He wrote this piece for Mada Masr to warn that trends that might have contributed to the rising insecurity surrounding aid workers persist. The humanitarian aid industry is too dependent, sometimes even a part, of the foreign policy of major countries. Armed militants may have many reasons to attack aid workers, but neutrality used to be one of the defense measures aid agencies deployed. Not that it worked all the time. Beyond safety, neutrality and other humanitarian principles framed a whole ethos for humanitarian aid that is now dangerously eroded and probably gone. After Khaled submitted this piece for publication and a few days before the World Humanitarian Day, seven aid workers employed by ACTED in Niger were killed by armed militants. May their sacrifices and those of hundreds of aid workers killed over the years help us all think harder and speak louder about what led to their murder and how the humanitarian aid industry could be reformed to better serve our desire for an end to inhumanities including the deaths of countess civilians.

You can read the full piece on Khaled’s blog – https://khaledmansour.org/en/when-aid-workers-serve-the-powerful/

The cruelty of containment: how the world’s wealthiest states are using inhumane and illegal methods to undermine the right to asylum