This opinion piece by Hameed Hakimi and Mark Bowden was first published by The Diplomat on August 17, 2022, and is shared by UAI with the kind permission of the authors.

Despite the US drone attack in July that killed Ayman Al Zawahiri in the heart of Kabul, Afghanistan’s woes and the plight of the Afghan people remain inherently unchanged.

Afghanistan dominated global headlines for a few weeks in August last year as tens of thousands of Afghans camped at Kabul International Airport with the desperate hope to secure a seat on one of the Western military evacuation flights. The speed of the previous Afghan government’s collapse that was precipitated by an unconditional US-led NATO military withdrawal caught world leaders, diplomats and aid officials in Kabul by surprise. Even the Afghan people and the Taliban were astonished by the speed of events.

Western donors had pinned their optimism for a longterm engagement in Afghanistan on the hope that there would be a political transition involving the Taliban in power sharing. Ironically, the Western governments had no plan B. As the last evacuation flight left Kabul, the international community faced multiple demands to address Afghanistan’s longterm socioeconomic problems, a serious drought and also a critical humanitarian catastrophe which has been deepening since the Taliban’s return to power.

Dilemma for the donors

A year after the Taliban’s takeover of Afghanistan, it is clear that Western sanctions against the Taliban leaders and the continued nonrecognition of a Taliban government have failed to influence the group’s hardline policies or rigid ideology. Meanwhile, nearly 25 million Afghans – including 13 million children – need humanitarian assistance. This is more than half the entire population. Over a million children under the age of five require treatment due to severe acute malnutrition.

So, what can Western governments do?

Independent evidence-informed research by the Afghanistan Strategic Learning Initiative (ASLI) concludes that humanitarian responses alone cannot solve the economic catastrophe facing Afghans. The humanitarian assistance must be accompanied by other economic measures such as support for Afghanistan’s financial system and restoring banking functions, empowering the private sector, and long-term planning and engagement with communities at the local level. These steps do not necessarily require a formal recognition of the Taliban regime.

Handing out basic food items and aid money cannot become an alternative to a functioning economy no matter how weak.  Yet, reviving the economy remains a major challenge. The US control of the international financial institutions (or IFIs) such as the World Bank, the sequestration of funds and the lack of a unified stance on engagement with the Taliban among Western donor nations are major obstacles. Afghanistan’s foreign reserves of over $7 billion are frozen – mainly in the US – causing paralysis in the banking sector. Biden Administration’s refusal to release at least $3.5 billion of the frozen reserves to stabilise Afghanistan’s central bank will further complicate the economic mess in the country. Ordinary Afghans and humanitarian organisations face severe restrictions in transferring money and using Afghanistan’s central banking system. The local currency, Afghani, has lost considerable value against the US dollar, pushing inflation and the cost of living unaffordably high amidst mass unemployment.

The killing of Al Zawahiri is a reminder that Afghanistan faces a serious risk of becoming a fertile ground for violent and terrorist groups. Last month a clerics’ assembly in Kabul highlighted the challenges of engaging with the Taliban regime as women were banned from attending and handpicked attendees pledged allegiance to the Taliban leader.  Afghanistan does not make the headlines unless there is news that reminds us of the inconvenient truths relating to Western legacies of the past interventions, or current sanctions. A UN report summarising human rights violations under the Taliban and a recent BBC investigation about the role of British SAS operatives in Afghanistan highlight such cases. But the reckless militarization of Afghanistan under Western military intervention for nearly twenty years happened before the Taliban seized power. Western military strategies in Afghanistan after 2001 empowered, protected and rewarded warlords and their militias while undermining development and state building. This is despite the billions of dollars spent in the country by Western taxpayers.

In the face of problems in Afghanistan that we in the West are partly responsible for, it is easy for the Western governments to give up. But this would condemn an entire nation and would be damaging to Western interests. Crucially, a total disengagement with Afghanistan would allow the Taliban regime to create a semblance of legitimacy as it forges closer links with Iran, Russia and China among other countries. Unlike other Islamist groups such as Hamas and Hezbollah, senior Taliban leaders regularly interact with Western representatives both inside Afghanistan and outside. The EU currently has a representative office in Kabul and western nations continue to fund humanitarian appeals. The combined US and UK contribution to the UN appeal amounts to over 40% of the total $2bn funded this year.

What should be done?

While it is true that Afghanistan was ranked consistently as one of the poorest and most aid-dependent countries in the world, the scale of poverty and vulnerability has significantly increased since August 2021. As Afghans are practically starving, the conundrum for Western donors is how to move forward with an agenda as the aid conditionality seems to have no impact on the Taliban behaviour. Similarly, Western governments have placed restrictions on their aid to avoid being associated with support for the Taliban.

However, a full-scale non-engagement is not an option and abandoning Afghans will effectively turn Afghanistan into a pariah state with dire consequences. Western governments need to urgently seek pathways for facilitating the return of IFIs to Afghanistan to revive its economy and the banking system. This will release pressure on the aid agencies. To address the banking crisis and the sequestration of the Afghan central bank’s reserves, lack of progress on discussions between the US and the Taliban must not lead to giving up on finding solutions. Western governments must also reach a meaningful accommodation with the Taliban to allow for the resumption of development projects so that ordinary Afghans who were employed in the civilian sectors can hope to return to work.

Today, Afghans are competing for attention from the media and the international community as Afghanistan’s multiple crises deepen rapidly. Not all of Afghanistan’s troubles began with the Taliban’s takeover of power last year. But if Western governments and humanitarian actors abandon Afghans now, we will be condemning a whole nation to a grinding cycle of brutal poverty with unpredictable long-term consequences, including to our security. The result will be turning Afghanistan into a pariah state. This should worry all of us and is preventable without the formal recognition of the Taliban regime.

Hameed Hakimi is an Associate Fellow at Chatham House in London and a Senior Fellow at the Atlantic Council in Washington DC. Among others, his research focuses on Afghanistan and South Asia, migration, and security. He tweets at @hameedhakimi

Mark Bowden is a former deputy special representative of the UN Secretary-General for Afghanistan where he was also the UN resident coordinator, humanitarian coordinator and in charge of the coordination of UN system activities between 2012 and 2017. He tweets at @UNMarkBowden 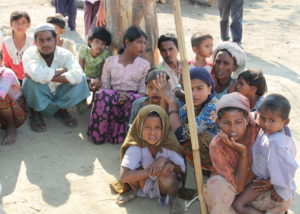