At the end of this year, what is the state of inhumanity for civilians in wars and for refugees and asylum-seekers?

Over the past year, in these newsletters, we have chronicled some of the most glaring atrocities, with the help of brilliant accounts by members of UAI and others. Two situations have dominated our coverage:

Asylum Issues and the situation in Libya

At the thematic level, the issue of asylum, the denial of access to it, and the criminalisation of both asylum-seekers and the humanitarian workers trying to help them, has been a constant concern. This month, we feature a ground-breaking interview by Jeff Crisp with UNHCR on their programme in Libya.

Alongside Jeff’s article, we publish a Statement, setting out the immediate action that is required, particularly by the European Union, to end a totally unacceptable situation.

In 2022, we will continue to follow these situations. In addition, under the auspices of UAI’s new Working Group on Campaign Materials and Policy Positions, we are taking a close look at the situation in Mali and the Sahel more generally, in Mozambique, in Myanmar, and at the thematic level we will focus on Explosive Weapons in Populated Areas, alongside our continuing work on Asylum.

New Website – We are delighted to announce that we expect to unveil our new much improved website early in the New Year. It will illustrate our unflagging commitment to exposing inhumanity in wars and asylum. We cannot remain silent in the face of what is happening on the borders between Belarus and Poland, Bosnia, and Croatia, between Greece and Turkey, between Libya and Italy, and on the southern border of the US. Nor can we close our eyes to the atrocities that continue to take place in armed conflicts in so many countries on every continent in the world except Antarctica. 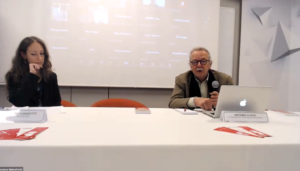