As we move into February, it is encouraging to have some good news to report. In our November Newsletter, we highlighted the plight of Mostafa Azimitabar, an asylum seeker, who had been held in detention for over 7 years awaiting a decision from the Australian Government about his application to stay. If you have been following UAI on Twitter, you will know that, on 21 January, he was released from detention.

This month, we are including:

1. The statement, released on 5 February, by UAI in the UK and others on the UK Atrocity Prevention Working Group, in response to the military coup in Myanmar on 1 February

2. An interview with Caroline Abu Sa’Da, Director of SOS Méditerranée, Switzerland. She highlights some of the difficulties faced by Search and Rescue (SAR) organisations during 2020, in the face of the pandemic.

3. A blog by John Borrie, Associate Fellow at Chatham House and Senior Advisor to UNIDR (UN Institute for Disarmament Research) about the importance of the Nuclear Non-Proliferation Treaty. His article was prompted by the scenes of chaos in and outside the Capitol Building in Washington shortly before the end of Donald Trump’s presidency.

On issues closer to home, during the pandemic, we are trying to improve the UAI website, as well as our communications with members and supporters. We no longer ask for an annual subscription from members but would welcome donations to help support our endeavors. Click on the button below for details of the bank account into which donations can be made. Your support is much appreciated.
You go to UAI UK page for details on how to donate here – https://www.against-inhumanity.org/uai-in-the-uk/
Finally, if you would like to volunteer to help the Association of UAI in the UK, in some capacity, or wish to submit a blog for consideration, then do contact us at .
The Committee of UAI in the UK
7 February 2021

1. The Prevention of Atrocities in Myanmar

In response to events in Myanmar last week, UAI in the UK has joined with other members of the Atrocity Prevention Working Group to issue a joint statement.

You can see the Joint Statement on The Prevention of Atrocities in Myanmar here – https://mcusercontent.com/19a879bcd0cfb98892221cabb/files/83273c6b-3c02-4964-863e-615f71f8c9e8/The_Prevention_of_Atrocities_in_Myanmar_JointStatement_05.02.21.pdf
2. Interview with Caroline Abu Sa’Da, Director General of SOS Méditerranée, Switzerland

Last month, we highlighted the legal no man’s land that volunteers can find themselves in by including an interview with Sean Binder, a young helper, on the island of Lesbos. In this newsletter, we feature an interview with Caroline Abu Sa’Da, the head of the SOS Méditerranée organisation in Switzerland in which she describes the added bureaucracy encountered by one of their vessels, the Ocean Viking, in 2020 and the complexities of trying to operate during the Covid crisis. 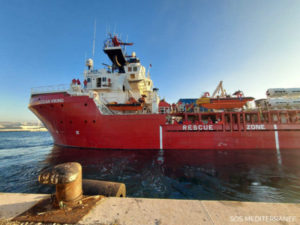 In a time of pandemic, it is easy to forget that there are other threats to mankind over which we could have more control. This blog was written, in January, by John Borrie, following the unrest in Washington, and elsewhere in the USA, in the weeks leading up to the inauguration of Joe Biden. 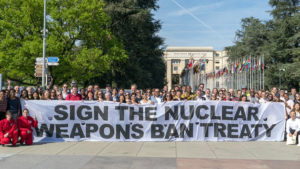